Last time, we talked about 6 big puerh tea mountains in east of LanCang river which is called Mekong river internationally on google map.

The problem is that along with the rising consumption of puerh tea in market and mainly in domestic market, the harvest of these 6 mountains is becoming less and less because of over-picking. Now the most harvest tea area has moved from east of LanCang river to the west side including 8 big tea mountains which will be introduced this time from north to south. 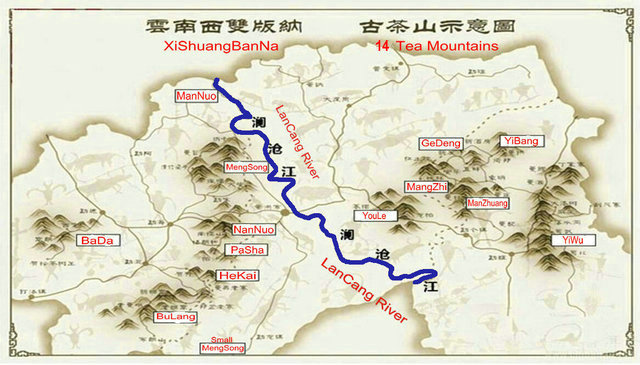 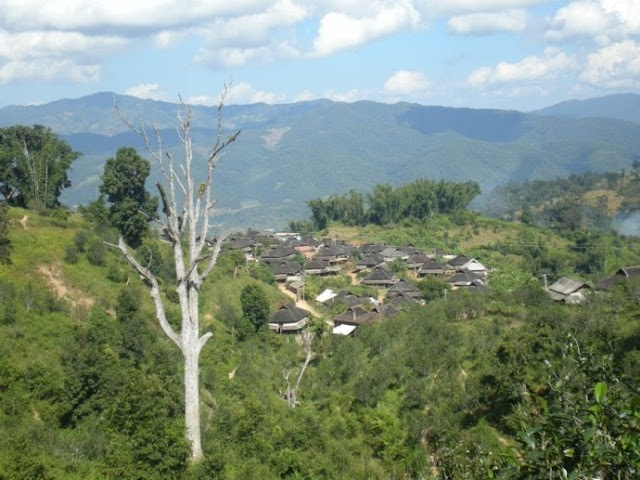 ManNuo is in the most north side of MengHai county and belongs to MengWang village, MengWang town also near the border of LanCang district and SiMao district.  The elevation is around 1200m to 1300m. Annual precipitation is around 1300mm to 1400mm.

Old trees are mainly in 3 villages including Big village, Up village and Middle village.

In history, here was one of the important route from MengHai to LanCang and used to be a large tea producing area. After other roads were opened up, ManNuo tea mountain gradually declined.  But also because of this reason, many high quality ancient tea trees were well preserved till fifties and sixties of last century. Then many trees were cut down to plant food crops. After this huge destruction, there are only 1.33 km² left in nowadays. 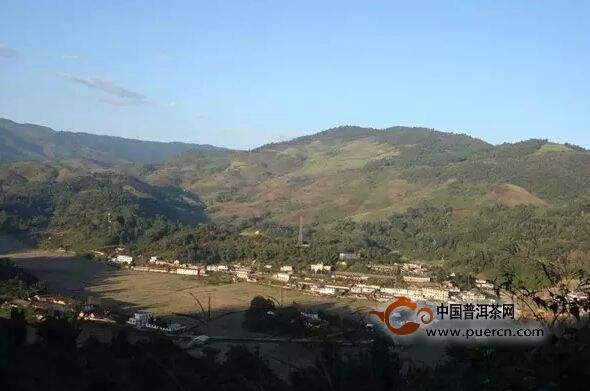 MengSong tea mountain belongs to MengSong town, MengHai county. The elevation of NaKa tea area is around 1600m and BaoTang tea area is near 1700m to 1800m. Annual precipitation is around 1400mm.
Old trees mainly grow in 7 tea areas including NaKa, DaManLv, BaMeng, DaAn, NanBen, New BaoTang and old BaoTang.
In history, it is one of the oldest tea producing areas in MengHai county. Especially NaKa tea mountain is one of the most famous tea area in XiShuangBanNa. Around 100 years ago, some Han ethic had moved here to start business of puerh tea. Local government built new tea plantation in DaManLv in eighties of last century and here became one of the most important tea material sources of MengHai tea factory which is also well known as DaYi.
MengSong still have ancient tea plantation of around 2km². NaKa is the most famous tea area and BaoTang has the best preserved tea plantation. NaKa has high density of old tea trees and mixed with some small leaf tea trees' area around 0.2km². BaoTang has lower density of old tea trees growing along with shrubs. There are still some very large old tea trees left like below: 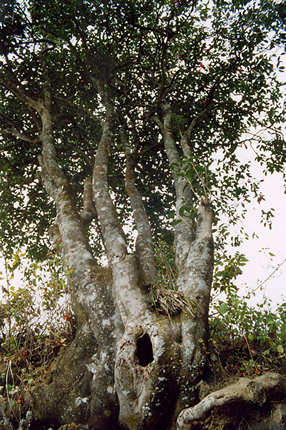 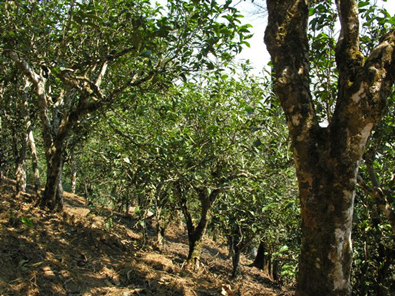 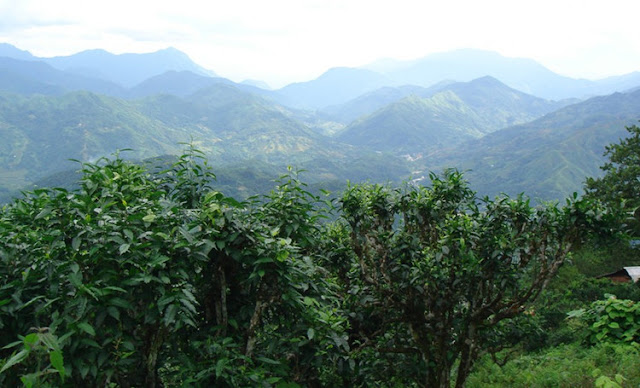 It belongs to GeLangHe town, MengHai county. There are around 24km to center of MengHai tea county. Average elevation is around 1400m. The annual precipitation is around 1500mm to 1750mm and annual temperature is around 16-18 ℃.

Old tea trees mainly grows in 3 villages of ZhuLin, BanPo and GuNian. The most well knows is BanPo.

The tea history of NanNuo is unknown but we are sure it is over 1000 years and the "King arbor tea tree" is one of the obvious evidences. It was also the first place to use tea machine to make puerh tea. But in eighties of last century, it was also destructed during the boom of modern tea plantation construction.

There is still 8km² of ancient tea plantation left which is also the largest tea mountain in XiShuangBanNa. These tea plantations are shared by 9 villages and the taste of every village is different from others because of the wide place of this mountain. BanPo village 's tea is the most attractive and well known by many tea lovers. But since the destruction in last century, there are shrubs growing along with tea old trees, and also some other man-made reasons, the tea quality declined in recent years.

This tea tree's photo below was taken by me. It is the "King tea tree of NanNuo".
More details with photos will be written on my another article. 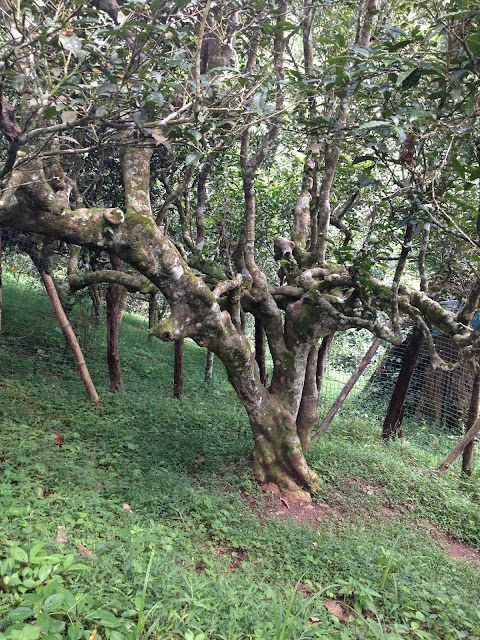 4. PaSha(帕沙)
PaSha means "A mountain and a river" 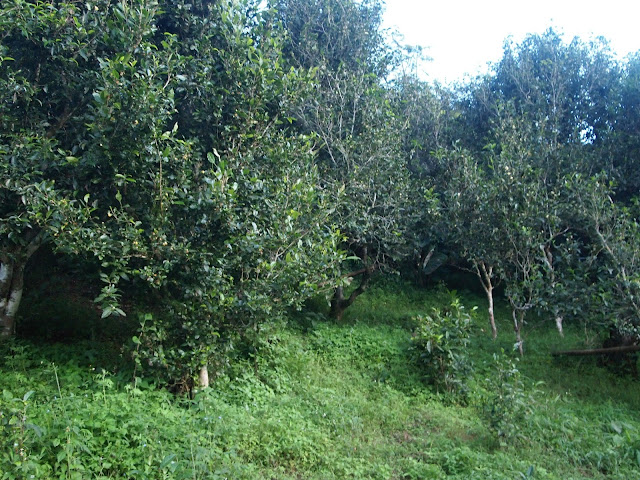 PaSha also belongs to GeLangHe town, MengHai county and between NanNuo and BuLang tea mountain. The elevation is around 1200m to 2000m. Annual average temperature is 22℃ and precipitation is around 1500mm.
Ancient tea plantations are shared by NanGan, LaoDuan, PaSha new village, old village and middle village.
From Tang and Song dynastries around 1000 to 1300 years ago, there had been HaNi ethic's ancestors living and planting tea trees here.
There are still 1.93km² old tree tea plantation left. And many old tea trees are over many hundreds years old. Basically these old tea trees were not dwarfed and well preserved till now . Especially old trees of PaSha old village are more famous than others.
Tea characteristics: PaSha old tree tea has obvious bitterness and the HuiGan comes after that is also obvious. Wild mountain flavor is rich.
This is "King tea tree" in PaSha middle village. It is already protected by local government. Age is around 800 years. 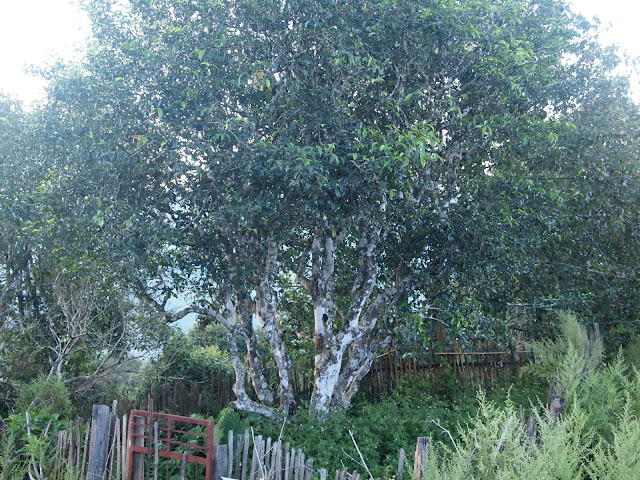 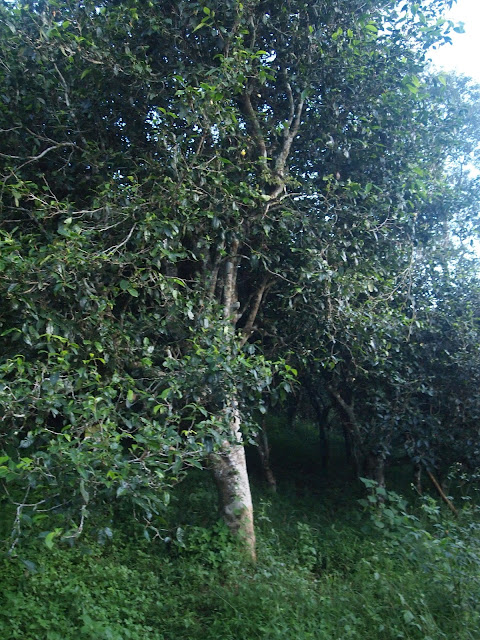 5. HeKai (贺开)
HeKai means "The first place to see the morning sun"
It belongs to HeKai village, MengHun town, MengHai county. The elevation is around 1400m to 1700m.
Old tea tree plantation are shared by New ManNong village, old ManNong village, old BangPen village, ManMai, ManBeng,ManLong.
Local LaHu ethic people belongs to ancient Qiang ethic. They had moved here and planted tea tree since more than 1500 years ago. HeKai is also one of the most famous tea areas in XiShuangBanNa.
HeKai still has old tree plantation of around 6km². There are more than 10 old trees near 1000 years old growing in New ManNong village and old ManNong village.
Tea characteristics: Body of tea soup is rich and with bitterness. HuiGan comes soon and mountain flavor is obvious.
This is "King tea tree" of HeKai. 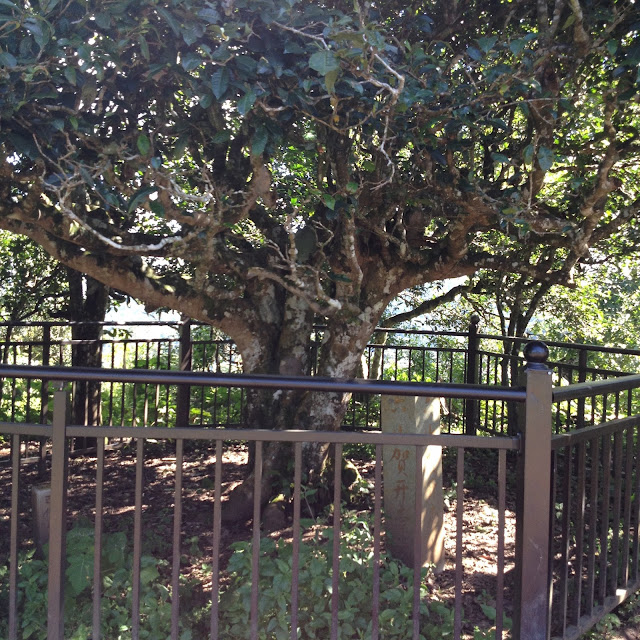 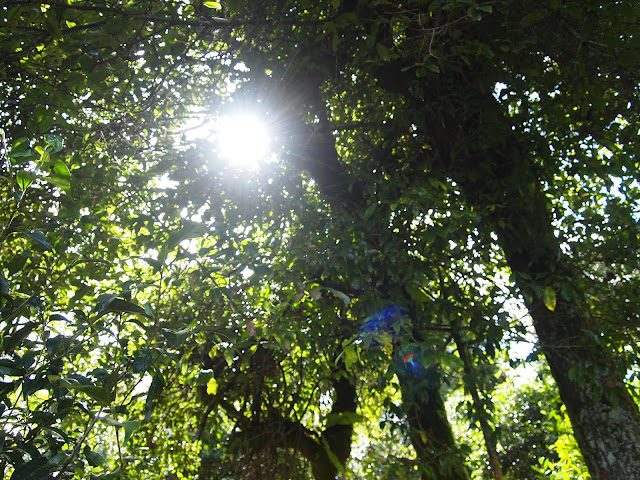 BuLang means "Where the BuLang ethic people live"
It belongs to BuLang town, MengHai county. Annual average precipitation is around 1300mm to 1500mm and average temperature is around 18 -19℃. Old BanZhang viallage and new BanZhang village's elevation is around 1600m to 1700m. LaoManEr village is lower around 1200m.
Old tea trees grow in old BanZhang village, new BanZhang village, LaoManEr, ManXinLong, ManNuo etc.
BuLang ethic belongs to old Pu ethic. Pu ethic had planted tea trees in YunNan province from more than 3000 years ago back to Shang and Zhou dynasties. At present, there are still large-scale old tea tree plantations left in LaoManEr village. Old BanZhang which is also called LaoBanZhang or LBZ began to be well known from start of 21 century. Ever from appearance or taste it has very obvious and attractive characteristics, so it is respected as "King" of puerh tea. In nowadays, it's price has become an important reference for puerh tea market.
There are totally more than 1.3km² left in old BanZhang village and new BanZhang village. And tea trees in old BanZhang village are older than new village's. LaoManEr village has more than 2km². Local people and government well know the importance of natural environment protection. But the tea quality still declines because of over-picking.
Tea characteristics: Old BanZhang' tea leaf has fat shape and strong taste. Bitterness is very obvious and HuiGan comes soon and lasts longer than other tea. ChaQi is rich. LaoManEr's tea is like old BanZhang but with more bitterness and HuiGan comes slower.
"King tea tree" of LaoBanZhang. 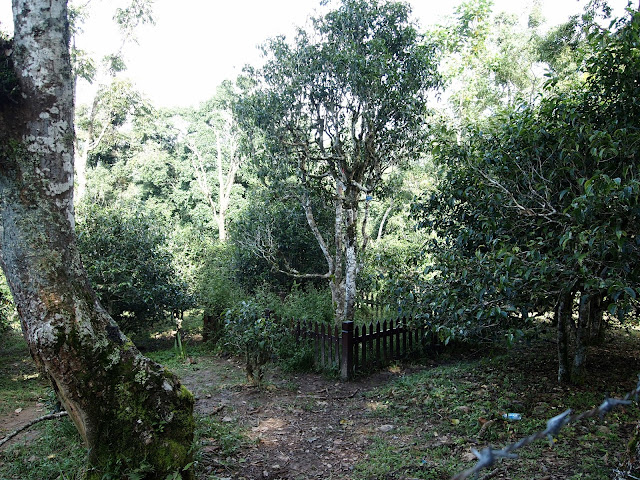 "Queen tea tree" of LaoBanZhang stands in the left of the "King tea tree" around 10m's away. 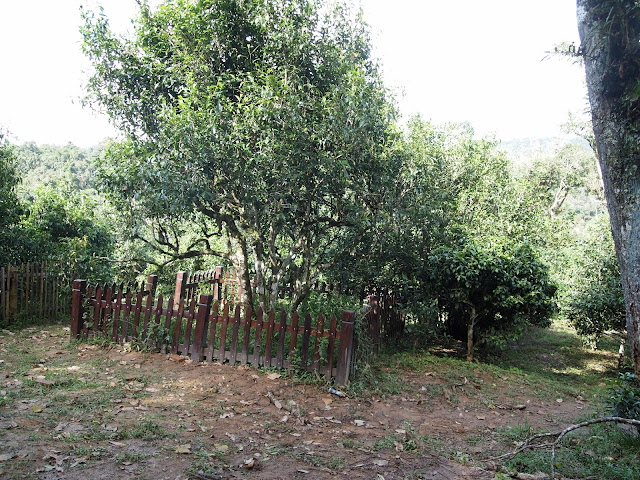 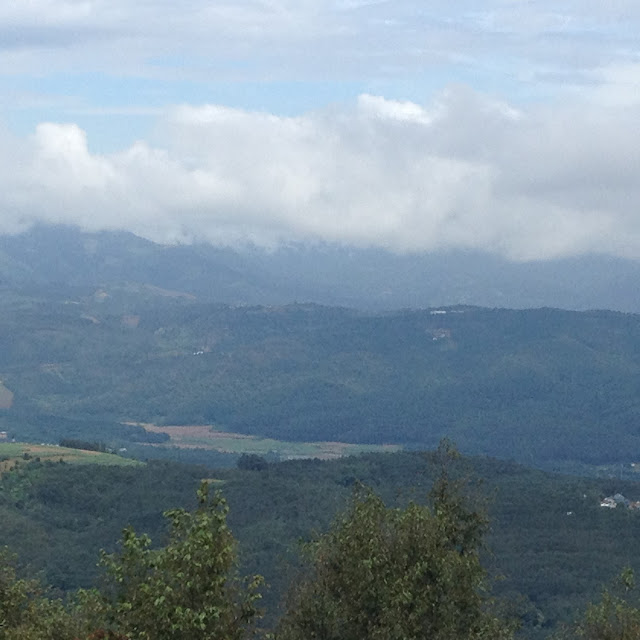 It belongs to MengSong village, DaMengLong town, JingHong city another district of XiShuangBanNa state. Elevation is around 1500m to 1800m.
Local people are main AiNi ethic which belongs to HaNi ethic. There are many old tea trees ages from 900 years to 1200 years. Now this place is applying for United Nations natural and cultural heritage. At ancient time of Qing dynasty, local tea was presented as gift to local chieftain.
There are around 3.33 km² old tea tree plantation left and with good preservation. There are two kinds of MengSong tea, sweet tea and bitter tea. Bitter tea has strong bitterness and even local people don't like to drink it.
Tea characteristics: Wild mountain flavor is obvious and fragrance is high. Body of tea soup is rich. Sweet tea has little bitterness and HuiGan comes soon. Bitter tea has obvious bitterness and HuiGan comes slowly and weakly. 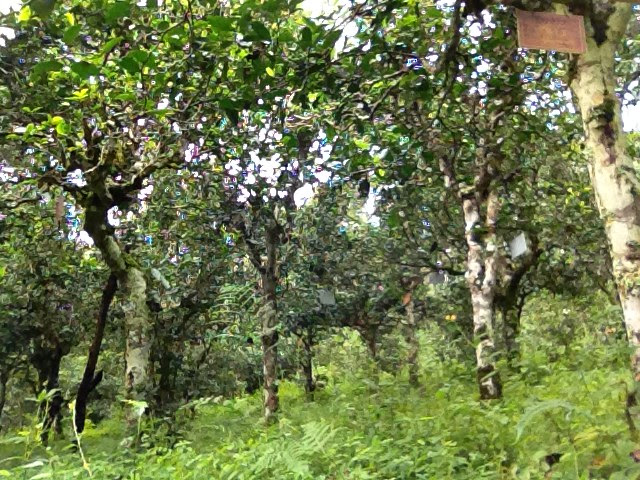 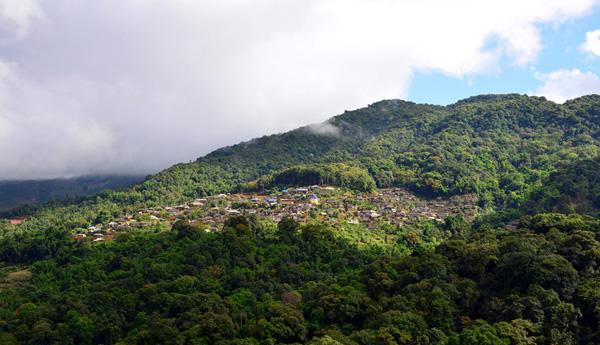 It belongs to XiDing village, MengHai county with elevation of around 1580m to 2000m.
Old tea trees grow in ManMai, ZhangLang and ManPaLe etc.
BaDa became famous since the wild big tea tree found in 1962 year. It has become an important evidence of one of the originalities of world tea.  Old ZhangLang village has history of more than 1400 years. The old tea trees were planted by ancestors of BuLang ethic.
Almost total 1.3km² wide old tea plantations grow along with wild forests and have never been dwarfed till now.
Tea characteristics: Mountain flavor is very rich and fragrance is pure. Bitterness and HuiGan are both obvious.
<End>
Next time, let's talk about old tea mountains in PuEr tea area which is one of the big 3 tea areas. There we will see more than 2700 years old wild king tea tree growing in QianJia village, AiLao mountain, ZhenYuan county and more than 27m high tea tree growing MengMa town, MengLian county. The largest wild tea tree groups in WuLiang mountain is over 1102km² and the largest manually planted tea plantation is over 74km² in WenShan mountain, JingGu county.